A novel procedure for simple diagnosis and effective therapy of the TMJ/TMD Dr Aladin Sabbagh
Temporomandibular joint (TMJ) screening prior to occlusal rehabilitation is indispensable for preventive, therapeutic and forensic reasons. Daily practice calls for a simple and effective concept with clear conclusions in order to treat TMD (temporomandibular joint disorder) patients, and to avoid iatrogenic mishaps during dental therapy. Furthermore, planning and prognosis can be essentially improved in many cases. Most diagnostic methods – from expensive axiographic andelectromyographic measurements to sophisticated imaging techniques (MRT, CT, a.s.o.) – entail considerable costs in terms of time and expense. As these techniques mostly focus on the examination of special parts and structures, they cannot be considered as universal or standard examination methods, even though they are indicated in some uncertain cases. According to the Kiel concept, the Manual Functional Analysis (Bumann et al. 1989) provided the first substantial progress towards a practice-oriented concept (Fig. 1). On this basis, the AquaSplint concept was developed. In compact form, the established techniques of the Kiel concept are utilised for tissue-specific diagnostics. Subsequently, the etiology and differential diagnosis are determined using the AquaSplint, which will significantly affect therapy decision and planning. The previous hypothesis implying that TMD originates from the stomatognathic area is only partially correct. In current literature, opinions widely differ on this issue. We believe that malocclusion may be among the causes of certain TMJ disorders, especially of pain due to compression. However, it rarely appears to be the only one. As generally known, there are patients who, despite extreme malocclusion, show hardly any or no discomfort at all, while other patients are severely affected sometimes despite minor, or lacking, occlusal discrepancies. TMD results from an interplay of multiple factors: • Malocclusion; TMJ overloading (compression, forced position, a.s.o.) • Hyperactivity of the masticatory muscles (bruxism/pressing) • Psychosomatic disorders; stress syndrome • Joint hypermobility, particularly in combination with general connective tissue weakness (Fig. 2, 2a) • Trauma • Neck disorders/cervical spine syndrome • Internal diseases (hormonal, circulatory disorders, rheumatism, a.s.o.)

Internal derangement of the TMJ results from joint hypermobility rather than from malocclusion. In a 12-year long-term study (1997-2009) from our orthodontic practice, all patients with diagnosed disc displacement (n= 535) were examined for their bite position, including manual examination of the wrist joint. Magnetic resonance images were obtained for uncertain cases. Anterior disc displacement with reduction was found in 421 patients, while 114 patients showed displacement without reduction. The association with connective tissue weakness was highly signifi cant. Concomitant general connective tissue weakness was observed in 92.5% of the patients (Fig. 2b). 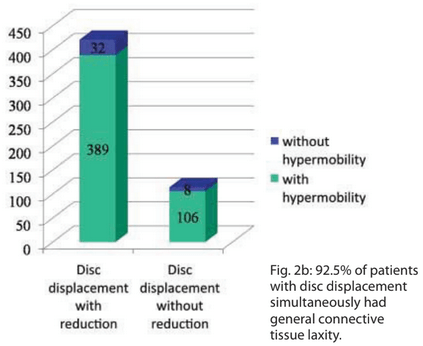 In contrast, no signifi cant association was revealed between malocclusion and the above-mentioned disc disorders. Therefore, disc repositioning with occlusal rehabilitation might be a questionable approach. This type of therapy is often complicated, time-consuming and expensive, and not without risk in case of surgical repositioning. Moreover, this therapy apparently does not necessarily protect from complete disc displacement without reduction later on. Therefore, according to our current AquaSplint concept, clicking alone does not constitute an urgent need for therapy. On the other hand, existing pain symptoms have to be examined as to whether they actually originate from the TMJ or masticatory muscles. Phantom or referred pain has to be excluded by tissue-specific manual diagnostics. The next diagnostic step should aim to determine whether malocclusion is the main cause of pain. This is most effectively achieved through (temporary) neutralisation/ disengagement of the existing malocclusion using the AquaSplint. Thus, a possible forced bite is eliminated and the muscles become relaxed. In serious cases, manual and physical adjunct therapy should be applied. A malocclusion-related TMD will usually respond to AquaSplint therapy within four weeks. Pain relief of at least 50% is a favourable pre-condition and indicator of promising orthodontic rehabilitation. Use of the AquaSplint often changes the bite. Subsequently, the resulting new and almost painless bite position requires orthodontic rehabilitation or at least stabilisation by means of an adjusted splint for night-time use.

AquaSplint classic The AquaSplint classic is the only self-adjusting, customisable and pre-fabricated TMD splint that can be immediately inserted without preparations, impressions or registrations. The device consists of two water pads connected by a tube (hydrostatic aqua balance). The water pads are provided with an acrylic saddle, which can be relined with a special long-term soft silicone. Such individualisation enables immediate optimum stability and comfort and, unlike conventional hard bite splints, offers the following advantages: • Immediate help/relief without laboratory procedures or preparations. • Universal and insertable in the patient’s mouth within a few minutes; may also be used for children and adolescents. • Self-adjusting, no grinding or frequent recall appointments required (thanks to the hydrostatic balance between the two water pads). • Replaces the relaxation and distraction splint (noincreased compression within the joint in contrast to splints with frontal bite piece/plan). • High accuracy and comfort of fi t through individual relining. • No more than 10 hours of daily wearing (eight hours by night, two hours by day). • Excellent clinical results and patient satisfaction owing to rapid pain reduction, comfort and advantageous positioning of the mandible (higher stability and less visibility compared to a maxillary splint).
In comparison to similar aqua pads, the AquaSplint classic offers the following advantages: • Increased muscle relaxation: While conventional products must be held in position by permanent mouth closure or muscular activity that may interfere with sufficient muscle relaxation, the inherent stability of AquaSplint classic (relining) and the favourable positioning in the mandible enable improved muscle relaxation. • The only self-adjusting, customisable TMD bite splint applicable even during orthodontic treatment (Invisalign or conventional brackets, provided that brackets are blocked out with protection wax) (Fig. 3, 3a). • Longer lifespan (four weeks) with hardly any loss of fluid. • Devoid of sharp edges. 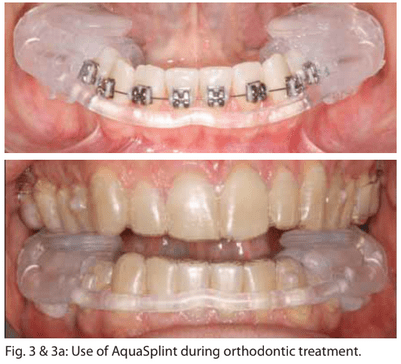 The Aqua Splint classic cannot be used as a permanent splint without an additional 0.5mm thin stabilising splint (Fig. 9), as undesired occlusal alterations/changes cannot be ruled out. The additional 0.5mm splint has proved to be a good compromise solution especially for patients who are unable or unwilling to wear a rigid bite splint any more after AquaSplint therapy. Furthermore, those additional thin splints clearly prolong the lifetime of the AquaSplint, particularly in bruxism cases. Usually, prosthetic/ orthodontic rehabilitation or an adjusted permanent splint (as a compromise) should follow AquaSplint therapy if the malocclusion has been the main reason of the pain, and if there is a huge discrepancy between the old and the new therapeutic/painless occlusion. In some cases, occlusal mainly results from trauma or systemic disease rather than from malocclusion. Should AquaSplint therapy fail to yield considerable improvement after four to six weeks, stomatognathic factors can be discarded as a main cause of disease. Unfortunately, such patients cannot be helped in the dental practice except for abrasion prevention. In these cases, interdisciplinary consultation involving other disciplines, such as ENT, orthopaedics, psychology or gynecology, is recommended.

AquaSplint Mini AquaSplint mini is a simplifi ed version of the AquaSplint classic with the following features: 1. Low height as the saddle and silicon relining material are not needed. This is particularly indicated for TMD patients with an open bite. 2. Particularly preferred for non-dental colleagues – orthopaedic specialists, ENT specialists, osteopaths, physiotherapists and pharmacists (there is no need for special dental relining). 3. The integrated wire can be bended individually to conform to the dental arch. 4. Can be inserted on either lower or upper jaw (Fig. 10 & 11). 5. An optimal and effective initial treatment that can be followed by the AquaSplint classic or occlusal rehabilitation or intervention. 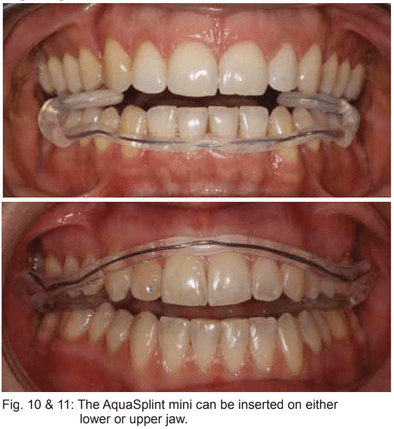 Last years’ experience with the AquaSplint concept has shown excellent clinical results and patient satisfaction, particularly due to rapid pain reduction, wearing comfort and favourable positioning of the mandible. Great advantages for the provider are the simple and quick diagnostic procedure, the effective therapy and the chance to dispense with impressions, registration, laboratory procedures and grinding-in. The new concept does enable us to provide the exact diagnosis and targeted therapy at a reasonable time and expense.