When Dr Edward Angle first classified malocclusions for orthodontic treatment, he created the categories of Class I, Class II and Class III, the principal categories by which cases are still identified today. In founding his classification system on this one dimension—the sagittal dimension—Dr Angle confirmed the sagittal relationship of primary importance and theone most critical and, indeed, most difficult to solve.

The Carriere Motion* appliance is a technology that first addresses the patient’s sagittal dimension to establish a Class I platform prior to comprehensive orthodontic treatment. This is accomplished usually within the initial 3 months of treatment. We call this traditional methodologies when traction is employed concurrent with fixed appliance treatment. After establishing a Class I platform in the buccal segments (intercuspation of molars, premolars and canines), the clinician finishes therapy with Carriere SLX** brackets or another finishing appliance of choice, including Invisalign,*** if appropriate. Employing the Sagittal First approach using the Motion Appliance makes achieving high-quality finishes easier and simpler.

The purpose of this discussion is to demonstrate application of the Sagittal First concept using the Carriere Motion Appliance to treat Class II and Class III patients. The following two cases offer typical examples of the types of difficult sagittal corrections the Motion appliance can address.

A female, age 23 years, 5 months, presented for treatment exhibiting a moderate Class III malocclusion with negative overjet, proclined lower lip with flat supramentale sulcus, open bite and crowding in the lower arch. The treatment plan was to distalise the lower dentition into a Class I occlusion (Sagittal First) using the Carriere Motion CL III Appliance, then generate space to alleviate the lower arch crowding and close the bite, utilising light-force archwires in a passive, self-ligating system. While tongue trainers would be bonded in conjunction with the fixed appliances later in treatment, the patient would also engage in tongue training exercises to correct her improper tongue positioning, especially while swallowing. Incorrect tongue positioning can compromise a satisfactory result. Bite closing would be accomplished by action of the archwires in the PSL brackets, not by use of any vertical elastics. Vertical elastics would be employed only during the finishing phase of treatment. In this way, gentle forces would be acting on the roots, minimising stress to the periodontal ligament. 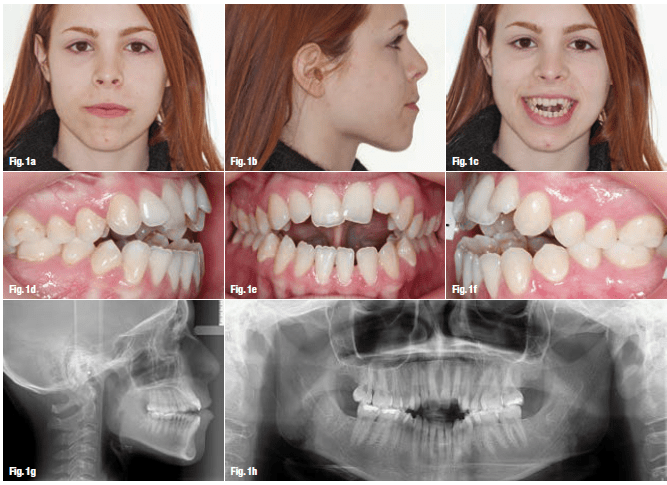 By 3 months, the sagittal aspect had corrected to the occlusal lock of the Class I platform (Sagittal First) with the counter clockwise movement of the lower occlusal plane. Note that the lower canines had extruded slightly. Some extrusion of canines is a positive sign of the counter clockwise rotation of the lower posterior occlusal plane that fosters a better positioning of the mandible in relation to the maxilla—a direct effect of the appliance. The Motion appliance was removed and tongue trainers were bonded to the lingual aspects of the lower incisors to continue to train the tongue to position itself properly in the oral cavity, specifically during swallowing and mastication. Concurrent with the tongue trainers, Carriere SLX .022″ PSL brackets were bonded.

Treatment followed the Carriere System archwire sequence. The archwires were all thermally activated wires with lower transformation temperatures chosen as archwire sizes increased to limit force on the periodontium.

When the upper .019″ x .025″ archwires were engaged, three links of power chain were run bilaterally from the second premolars to the first premolars and from the first premolar to a crimpable hook attached to the wire distal to the lateral incisor to retract the anterior segment, bringing it into the final desired position. 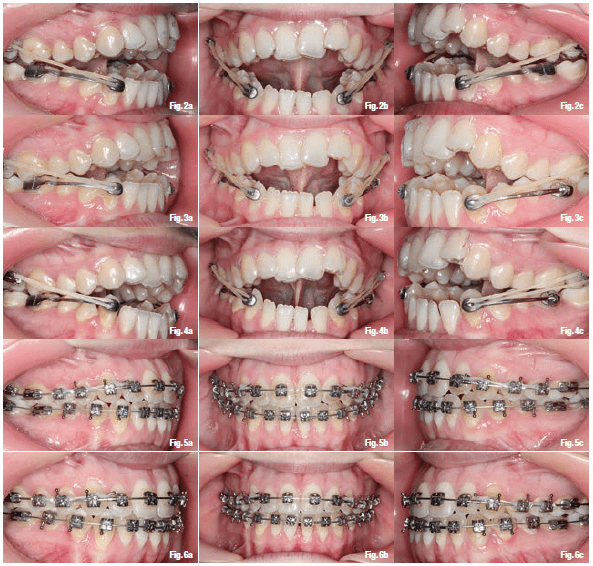 With 3 months of sagittal treatment and 11 months of fixed appliance treatment, the case finished to a satisfactory result. The final cephalometric and pantomographic X-rays highlight the positioning and health of the roots, a positive sign of the respectful approach of these appliances on the periodontium. 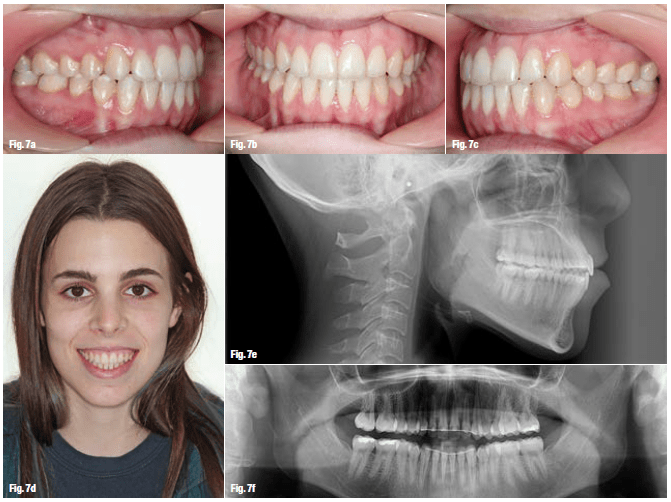 A 27-year-old female patient presented for treatment exhibiting a Class II, division 1 malocclusion with a severely protrusive maxilla and a severely retrusive mandible. The patient had had previous orthodontic treatment with extraction of the lower premolars. In consultation with other orthodontists, orthognathic surgery was recommended, which she wanted to avoid.

The treatment plan was to reposition the mandible forward, placing the case into a Class I occlusion (Sagittal First) using the Carriere Motion Clear Class II Appliance, then complete treatment utilising light-force archwires in a passive, self-ligating system. The Motion Clear Appliance is the latest addition to the family of Motion appliances, designed for the patient with high aesthetic demands.

Treatment commenced with the Motion Clear Class II appliance bonded directly to the upper canines and first molars with 6 oz, ¼” intraoral elastics for the first month and 8 oz, 3/16″ elastics for the second and third months, engaged for Class II traction to molar tubes bonded to the lower second molars. An Essix .04″ vacuum-formed retainer was employed in the lower arch for maximum anchorage.

By the end of the first month of sagittal correction, there was already evidence of some derotation of the upper first molar and movement of the buccal segment (molars, premolars and canines) toward a Class I occlusion. Space was also beginning to open between the upper incisors. After 3 months of sagittal correction, the occlusal lock of the Class I platform had been accomplished (Sagittal First) and the case was ready to progress to the next stage. The Motion appliance was removed. While in this case, it would have been easy to finish the case with Invisalign, the patient chose fixed appliances so Carriere SLX .022″ PSL brackets were bonded. 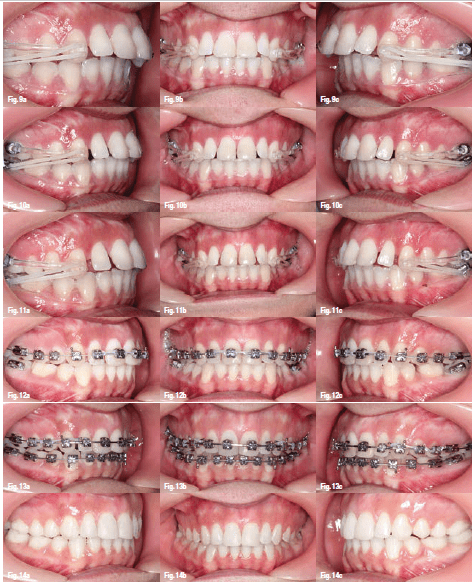 With 3 months of sagittal treatment and 8 months of fixed appliance treatment, the case finished to a harmonic occlusal and facial result. The result exhibits an excellent repositioning of the mandible held in position by the occlusal lock of the Class I platform (intercuspation of the molars, premolars and canines). The mandibular repositioning was obviously not a result of growth in a 27-yearold woman, but the result of balancing the structures of the temporomandibular joint, reposturing the mandible in the temporomandibular space. Prior to treatment, she could not protrude her mandible even to position her lower anterior teeth into the lingual aspect her upper anterior teeth. For this patient, the mandibular reposturing created a dramatic, positive change in her facial profi le to create a beautiful symmetry. Figures 16 to 18 offer illustrations of this reposturing. An indication of the extent of this movement is the fact that after treatment, the patient was able to protrude her mandible beyond her maxilla. 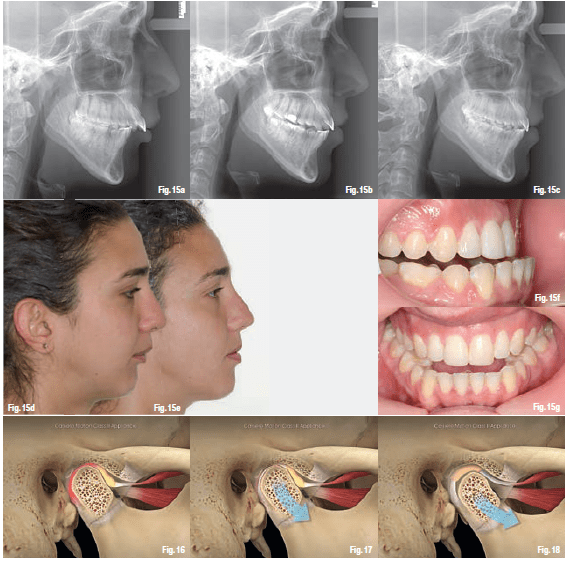