Summary: Periodontal diseases are the „living nightmare” for many patients and doctors, especially in their advanced form when the mobility of teeth reaches the 3rd degree and requires tooth extraction. There is still a belief that periodontitis in its aggressive form, might be the reason for a loss of teeth among relatively young people. Implantological treatment, which might restore the efficiency of chewing, is difficult due to loss of enormous amounts of natural bone tissue in both mandible and jaw. This often requires extensive augmentation procedures leading to a long period of patient’s indisposition in professional and social life. However, scientific research has shown that implantological treatment is a very predictable method with patients affected by periodontitis. According to available medical data, the risk associated with immediate implant placement is not greater among the affected group compared with other patients. The removal of the source of infection in the mandible or maxilla induces spontaneous regeneration. Immediate prosthetic restoration protects it against external injuries. This method of therapy enables the natural reconstruction of hard tissues, due to blood clot forming in the alveolus immediately after the extraction.

The articles describes the case of a 51-year-old female patient, who attended my surgery in the autumn of 2013 with advanced periodontitis manifesting itself mainly in the mandible. The patient had developed initial symptoms of arthritis and general weakness. ESR was at a two-digit level. History revealed that the patient had been undergoing periodontal treatment for over 10 years, with no success in stopping the progress of the disease.

Intraoral examination revealed pockets of over 4 mm in depth, purulent and bloody secretion; hygiene indicators were API 25%,and SBI 20% respectively; all teeth in the mandible showed 3rd degree of mobility (Fig. 1). Tomography confirmed the diagnosis of advanced incurable periodontitis (Fig. 2). Following consultation, the decision was made to extract all teeth in the mandible and immediately undertake implantological treatment with a temporary prosthetic reconstruction fixed on the implants. Patient was referred to routine medical and laboratory tests.

On 18.09.2013, all teeth were extracted following block anaesthesia. Prior to extraction, Widmann flap was performed to fully remove the granulation tissue (Fig. 3). One of the conditions of a successful procedure is a full removal of affected soft tissue.

The implants were inserted using the „shadow adhesion” technique whereby the implant must, along its entire length, adhere to a wall of the alveolus, 1-2 mm subcrestally (Fig. 4). Should a membrane be required, it must be able to spread over the area of bone defect and the implant so the gap between the membrane and the implant equals at least 2 mm (Fig. 4). Aggressive type implants were inserted in the area of the following teeth: 36, 34, 32, 42, 44 and 46.

Bone fragments resulting from the implant bed preparation were gathered with a collector, soaked in gentamicin solution 40mg/ml and used to fill the bone defects. The implants were inserted so as to achieve good stability in the bottom 1/3 of the thread – this is necessary for the success of the procedure and should equal at least 30 Nc. The implants were fitted with temporary prosthetic connectors. The post-operative wound was closed with single stitches using 5,0 thread. Silicone caps of the temporary connectors were fitted in a previously prepared temporary prosthesis using the direct method. The temporary prosthetic complement was embedded by means of temporary cement (Fig. 5 and 6). 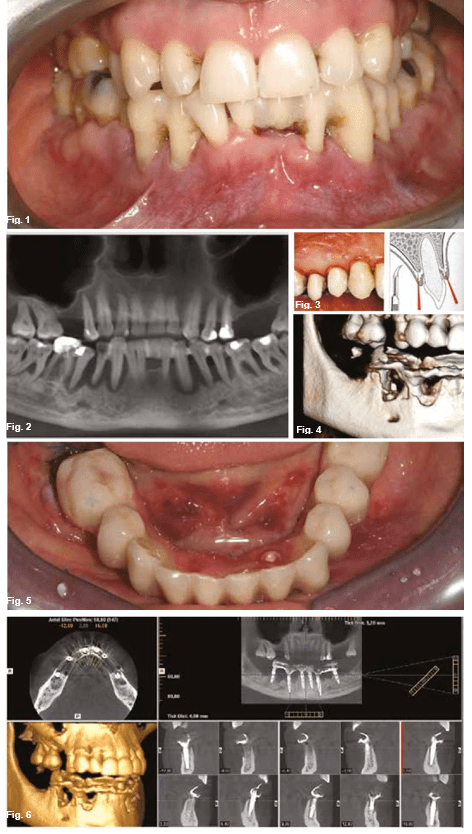 CBCT photography was ordered (Fig. 7). The follow-up appointment was scheduled for the following day and stitches were removed after 10 days.

After 3 months, the temporary prosthetic complement (Fig. 8) was replaced with a final cement work (Fig. 9). Furthermore, a follow-up CBCT imaging was ordered, to be further repeated after 12 months (Fig. 10 and 11). 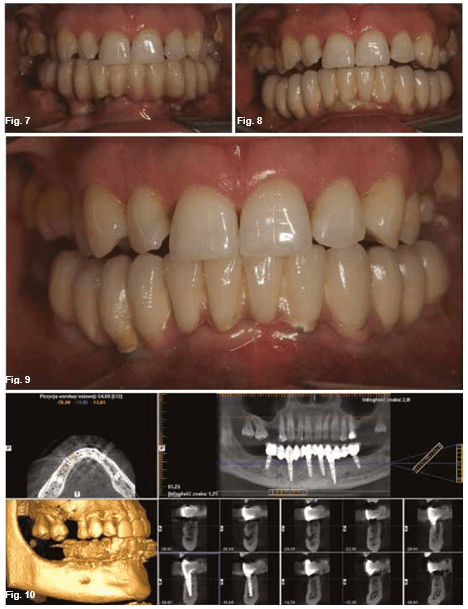 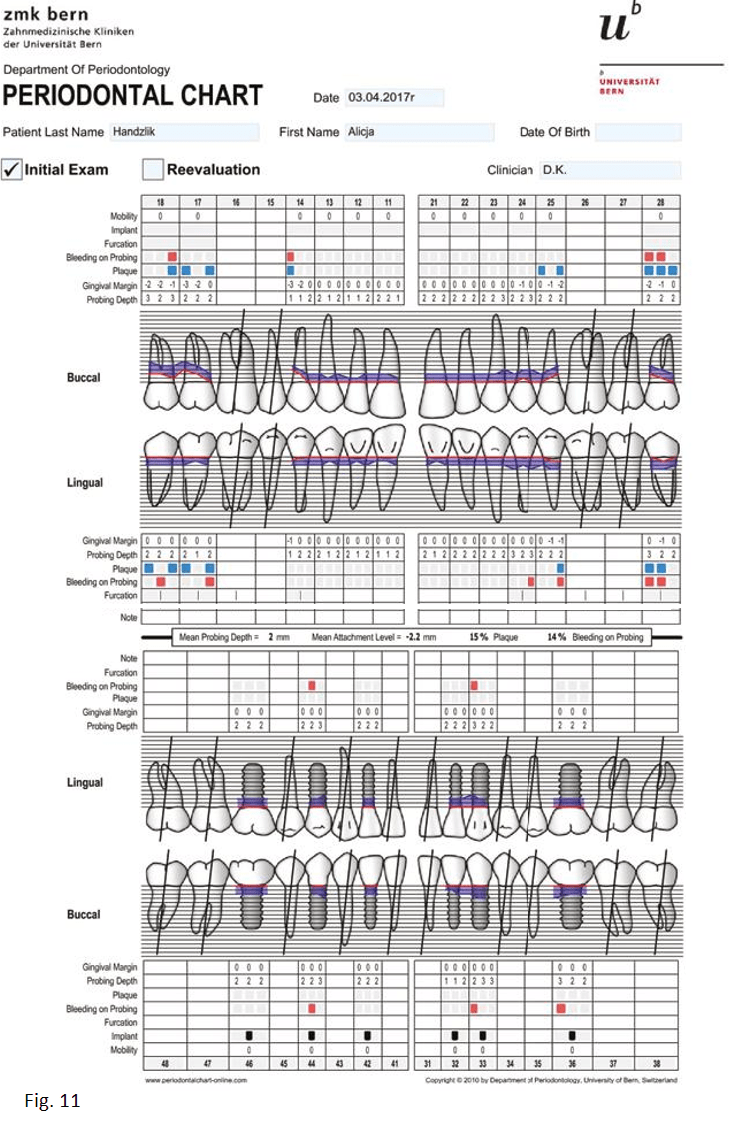 Periodontal examination of the remaining teeth and of the implants was carried out in April 2017 (Fig. 12), along with repeat CBCT imaging (Fig. 13- 15).

The status 3 years post procedure is shown in fig. 16-17. The patient is part of the Recall programme, in 6-month cycles since the date of the procedure.

Implantological treatment of patients with advanced periodontitis, using the immediate implantation method and prosthetic supplementation fixed on implants, allows to shorten the period of treatment and indisposition of the patient as well as reduce costs. The activation of the bone, typical for periodontitis, is beneficial for its spontaneous regeneration.