Author: Dr. Moldoveanu Bogdan Endodontics has evolved through the years and has become one of the most technologically advanced fields in dentistry.Progress has brought forth a new vision when it comes to root canal shaping, we are now not only capable of understanding more but we are also capable of doing more, thus providing better healthcare solutions for our patients. Treatment and prevention of apical periodontitis is still the major goal of root canal treatment and can be achieved by thorough cleaning and shaping of the root canal to eliminate microorganisms . The aim of root canal shaping, as Schilder H. stated many years ago, is to form a continuously tapered shape with the smallest diameter at the apical foramen and the largest at the orifice so as to allow effective irrigation and filling and not change the original canal curvature. Root canal instrumentation, thus, remained one of the most important steps in root canal treatment but preparation of narrow and curved canals was challenging and could have created procedural errors, such as zips or elbows. The introduction of nickel–titanium (NiTi) instruments to clinical endodontic practice has enhanced the mechanical preparation of the root canal space, avoiding problems associated with stainless steel instruments.

Another advantage of NiTi rotary instruments, compared to stainless steel hand ﬁles, is that preparations are rounder and centered in the canal, helping to maintain the original root canal anatomy. However, use of rotary instruments involves signiﬁcantly more rotations inside the canal, so they are more susceptible to fracture due to torsion and/or ﬂexion. In the past 10 years, several proprietary processing procedures for nickel titanium (NiTi) alloy were developed to improve the mechanical properties of NiTi endodontic instruments. Beside speciﬁc thermal and mechanical treatments, manufacturers introduced several machining procedures (e.g. twisting, electrical discharge machining), as well as techniques for ﬁnalsurface ﬁnishing. NiTi alloys used for endodontic instruments can be subdivided into instruments that mainly contain the austenite phase (austenitic: conventional NiTi, M-Wire, R-Phase) and those mainly containing the martensite phase (martensitic: CMWire, Gold and Blue heat-treated NiTi). Thermomechanical treated NiTi alloys have been reported tobe more ﬂexible with improved cyclic fatigue resistance and greater angle of deﬂection at failure when compared to conventional NiTi. One of the most well-known instruments when it comes to heat-treated rotary files are the HyFlex CM files. HyFlex Controlled Memory (CM) (Coltene-Whaledent, Altstatten, Switzerland) is a NiTi rotary system made from a unique thermal process that controls the material’s memory, CM wire is created by thermally treating the NiTi wires to shift the austenite/martensite transition temperature at about 50 °C so that a stable martensitic microstructure occurs at mouth temperature. Therefore, the structure of HyFlex CM (Coltene/Whaledent) enables significant fatigue resistance, ease of bending, and the ability to return to its original shape when heated above the transformation temperature. Recently, Coltene has introduced a new type of file, the HyFlex EDM. HyFlex EDM (Coltene/Whaledent AG, Switzerland) instruments are manufactured using the technique of electrical discharge machining. Electrical discharge machining can be used in manufacturing all types of conductive materials (i.e., metals, alloys, graphite, ceramics, and so on) of any hardness at high precision levels.

This manufacturing process uses spark erosion to harden the surface of the NiTi file, resulting in superior fracture resistance and improved cutting efficiency. HyFlex EDM NiTi files are manufactured using Controlled Memory alloy technology just like the HyFlex CM (Coltene/Whaledent AG) NiTi files. In the course of shaping the root canal system, the clinician must determine three critical parameters: the length of the canal, the taper of the preparation and the horizontal dimension of the preparation at its most apical extent. Because the apical portion of the root canal system has been regarded as a critical zone for infection control, the width of the apical preparation has been a matter of great interest and debate. While root canal preparation should be large enough to eliminate bacteria, infected dentine and pulp remnants, it should not remove dentine excessively to the point of endangering root integrity and potentially increasing the risk of fracture. As shown, highly tapered instruments with a small tip performed worse in that regard than less tapered or variably tapered counterparts with a larger tip diameter. In Endodontics, a paradigm has been created. Theories and techniques for instrumentation of curved root canals state that the use of a #25 file in the apical portion fulfills all the requisites for cleaning and shaping of the root canal system. The theories emphasize that, beyond this numbering (#25), failures such as deviations, perforations, zipping, etc., may occur frequently. However when one is treating a tooth which exhibits signs and symptoms of periapical periodontitis further enlargement might be required since it appears that the minimum instrumentation size needed for penetration of irrigants to the apical third of the root canal is a #30 FILE. By using a combination of adequate instruments such as the HyFlex EDM & CM the clinician is able to adopt minimal invasive shaping techniques adhering to the principals of evidence based endodontics as well. In this case report we will focus our attention on a second upper molar. The patient came to our office accusing pain, provoked especially by hot and cold stimuli. We examined the region and the following diagnosis was established, 2.7 Symptomatic IrreversiblePulpitis. An endodontic treatment was scheduled; after obtaining an adequate isolation complete removal of the old glass ionomer filling was performed.

Before proceeding with the pulpectomy, caries removal was done, caries indicator (Sable Seek – Ultradent) was used.

The molar was temporarily restored using glass ionomer cement but in the following weeks a permanentindirect restoration was performed a by a prosthetist in our clinic. 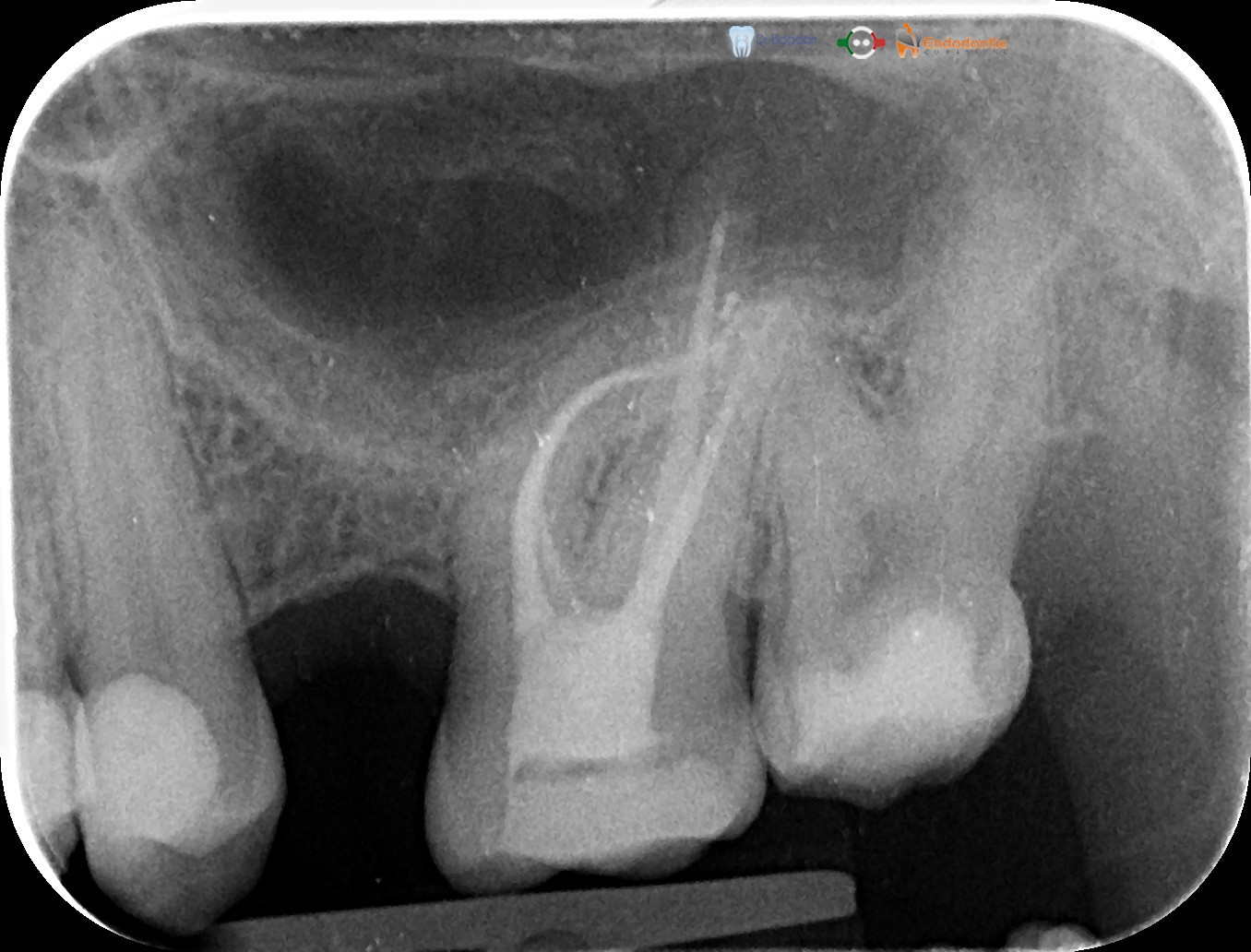 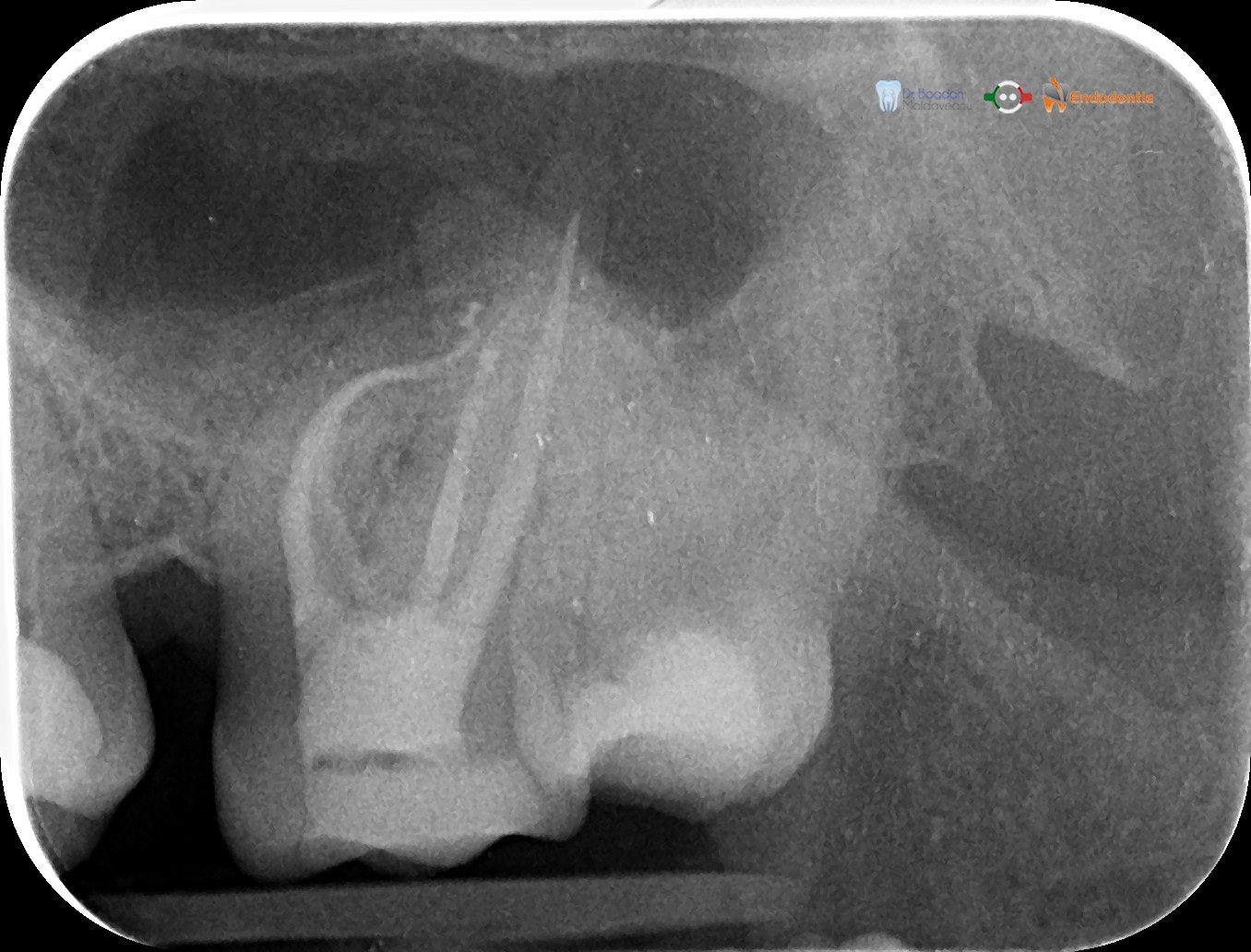 Minimal invasive dentistry is today a real choice, however, regardless, of personal dogmas, and beliefs we must always be balanced when deciding what minimal invasive means. Science and operator experience must blend together in a way that is most beneficial for the patient and not for the ego. As doctors, our main priority should always be the quality of the healthcare that we provide.